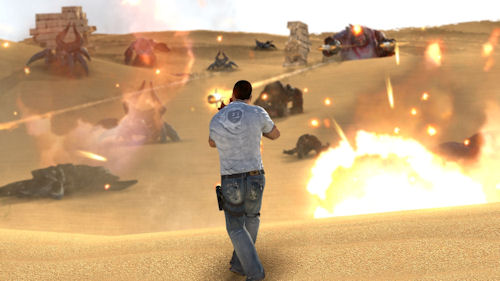 Serious Sam 3: BFE has been given an official release date.  You'll be blasting away with 16 other Sams in co-op on October 18th when the game is released via digital channels like Steam.  While October isn't quite summer anymore, like originally planned, it's still not too far off.  Your price is $39.99 for the regular edition and $49.99 for the digital deluxe edition.

Speaking of Steam, you can pre-order the game now and there's various offers to take advantage of.  Here's the break down.

You can also pre-purchase the digital deluxe edition of the game which includes classic versions of the Serious Sam First and Second Encounter titles - and you can also save 10% if you own the HD versions.

Here's the full contents of the digital deluxe edition.

Finally we have a brand new trailer and a fresh batch of screens for the game.  Don't forget to check out our preview of the title including hands on time with the game's split-screen mode.