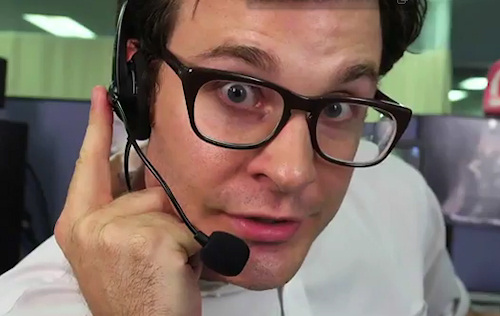 Croteam has been known to creatively market Serious Sam games in the past, and their Serious Sam 3: BFE push is no different. Well, it may be the most awesome campaign yet, so that’s kind of different. Instead of putting out a plain old trailer, the newest BFE trailer follows the adventures of a fictional help line worker. See, gamers have become soft over the years thanks to modern conveniences like regenerating health and *gasp* cover. Crutches! Gamers who can’t handle the traditional Serious Sam non-stop craziness that returns in Serious Sam 3: BFE can supposedly call the Help Line.

The only problem? The marketing team forgot to provide the number. But they did send along the YouTube video in question (part one of three) and a witty press release. Check it out.

SERIOUS SAM 3: BFE HELP LINE LAUNCHES TO PREPARE GAMERS FOR THE RETURN OF THE ARCADE-STYLE SHOOTER

Austin, TX  – Croteam and Devolver have launched a Serious Sam 3: BFE help line for gamers softened by years of cover-heavy shooters. With Serious Sam 3: BFE providing no real cover against unrelenting enemy hordes, a full arsenal that can be carried all at once, and wheels-off 16-player campaign co-op, fans may need a shoulder to cry on as the game marches towards an October 18th  launch. The three-part series follows one particular help line operator as he takes calls from concerned gamers anticipating the release of Serious Sam 3: BFE.

“I’m already fielding all sorts of calls from shooter fans wondering where all the conveniently placed barricades and random concrete walls are in Serious Sam 3: BFE,” said Rich Knuckles, Assistant Supervisor at the Serious Sam 3: BFE Help Line. “Most of these guys have gotten soft from years of crouching behind cover, picking off one or two approaching enemies as they make their way through missions. It’s pathetic.”

Serious Sam 3: BFE is now open for preorders on Steam, Get Games, Impulse, Direct2Drive and other digital download services further increasing the need for a help line for more weak-minded gamers to prepare for the total mayhem that comes with an all-new Serious Sam game. “I hope we are outsourcing these help line operators to save some cash,” asked Fork Parker, Devolver Digital CFO. “Use one of those Eastern European countries where the girls have perfect asses and sexy accents. You know, like Brazil.”

For more nonsense from Devolver Digital and Croteam line them up on Twitter at @DevolverDigital and @Croteam. Don’t follow @ForkParker as it might get you fired.