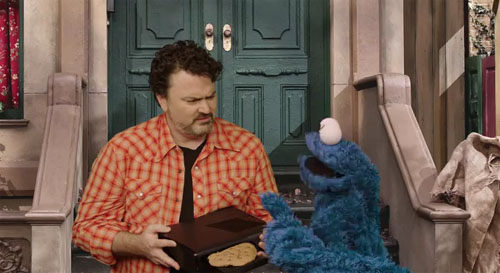 It's been awhile since we've reported on the upcoming Double Fine Kinect game, Once Upon A Monster. With its October release fast approaching, the studio has released a trailer for the game, co-starring Tim Schafer and Cookie Monster. While the trailer is short on information about the actual game (and never actually answers the question of whether an Xbox 360 can play a chocolate chip cookie), it serves as a reminder that Double Fine will certainly be applying their classic humor to this young kids game.

Once Upon a Monster will support drop-in/drop-out co-op for two players, whether it be two kids or a kid playing with Mom or Dad. It promises multiple activities over its six chapter story.