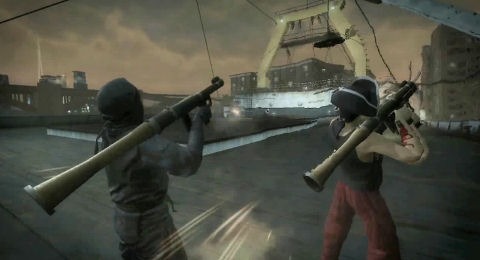 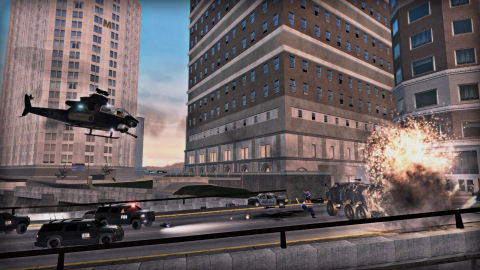 Open world games are a natural fit for Co-Op, and while games like Crackdown got it right, while some other big name games sort of missed the boat.  This why we are excited about Saint's Row 2 from Voilition which features a game designed with co-op in mind from the get go.  We got to ask James Tsai, Saints Row 2 Lead Designer, a few questions concerning the over the top open world game and it's co-op aspects.

Co-Optimus: So what made you decide to put co-op in Saint's Row 2?  Was this planned from the beginning, or did you see it as a natural fit somewhere through development?

James Tsai:  Putting co-op in Saints Row 2 was something we decided to do pretty early on in development.  It was a natural fit in the sense that there was a lot of enthusiasm for it and we felt that it was where open world gaming needed to go as a genre, but we also were working with the game engine from the original Saints Row, which was decidedly not co-op friendly at the time.  Our programmers spent a lot of time adding support and rewriting stuff to get two players in the game.

As for why we decided to put it in, it was something that had an obvious and personal appeal to us as gamers.  I can’t tell you how many times my brother and I played co-op games together on our NES growing up.  The fun was undeniable…working together towards a common goal was far more fulfilling than competing against one another in races.  We must have blown up that freaky heart thingy at the end of Contra or fought our way all the way through River City Ransom a thousand times.


Co-Optimus: Why do you think we've seen resurgence in cooperative modes in games?

James:  Co-op is growing because as a community, gaming is growing.  As gamers, we’re becoming increasingly social about our passions and are looking for more ways to share our experiences.  Co-op has flourished the same way fansites, forums, video sharing, trophies, achievements, on-line names, and gaming news sites flourish.  It taps into the fundamental truth we all know: games are too fucking cool to not share with others. 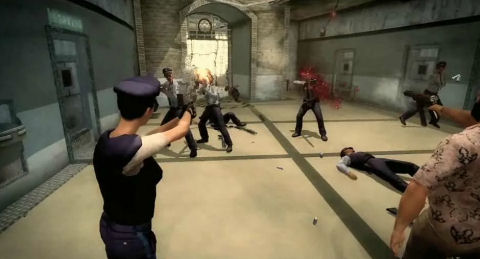 Co-Optimus:  Is the co-op seamless?  Will you be able to join a buddy's game at any time and play?

James:  Yes, you can join your friend’s session in progress in Saints Row 2 for co-op play.  You can hop right in at wherever they are in their campaign and get into the action.  Your individual progress is always saved since so any rewards and cash earned while playing with someone else won’t disappear, and you won’t have to replay missions or activities that are already completed if you don’t want to.

Co-Optimus:  Are there any co-op specific mini-games?  What about the vehicles, any vehicles that play particularly well in co-op?

James:  There are a few special co-op mini-games where players will be able to compete against one another.  When two buddies want to start blowing off steam, they can enter our Death Tag or Cat and Mouse modes.  Certain missions and activities also have a special role for the second player, so both players will have to work together to succeed as opposed to us developers just tossing another gun into the mix.

My favorite vehicle in co-op is the assault helicopter.  The pilot gets to fly this agile, fast moving chopper through the city and the gunner gets access to a chain gun and some very nasty laser guided rockets.