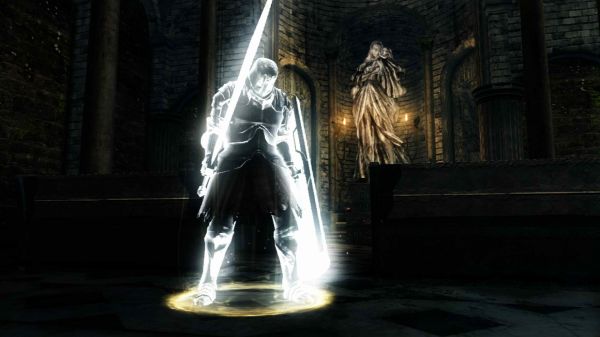 Here's the latest trailer from Dark Souls.  I can't really tell you anything about it.  I've decided to go on a media blackout since this is one of my most anticipated games of the year.  I don't want to spoil anything for myself. That means I'm not going to read or watch any of the coverage, including the trailers.  I'm just going to blindly post this, and hope it's not full of boobs.

But... since it is a Dark Souls trailer, I'm going to try and predict what happens.  First of all, it's dark.  I know, not a real stretch.  But it's really dark.  The music will have the dark orchestral tones we've come to expect from epic RPGs like this. There will be a shot of a solitary knight plodding through a barren landscape.  A few grub enemies will make an appearance, and then there will be some footage of giant boss battles mixed in.  The boss visuals will look really awesome, but that's because they're showing way more cut scene material than in-game action, which is okay, because it looks so damn cool.  There will also be plenty of ridiculous armor and some unwieldy weapons, both held by the main characters and by enemies.  We'll even see an invading phantom and some co-op action...

Dark Souls will corrupt your Xbox 360 and PlayStation 3 on October 4th.  It supports at least three player online co-op.