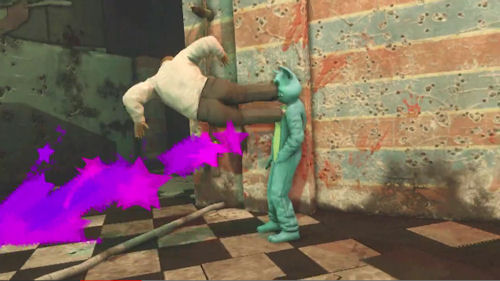 Go ahead and just take that picture in right there.  Yup, flying kick into a furry with a purple star trail.  The insanity of Professor Genki is back in Saints Row: The Third thanks to his popular show "Professor Genkis Super Ethical Reality Climax" where players compete in hilarious death and dismemberment games.

I'm still not quite sure what to make of the whole pre-order bonus, but it looks like it'll be a blast to play in the two player co-op game.  Here's the trailer to make you smile this Friday.

In other Saints Row: The Third news, the achievements for the game have been revealed.  Sadly, there's not a single co-op specific achievement - so we can only hope all of them are earnable by both players when playing cooperatively.

You can view the full list over at Xbox360Achievements.org.

Saints Row: The Third is out on November 15th on the Xbox 360, PlayStation 3 and PC with two player local and online co-op.