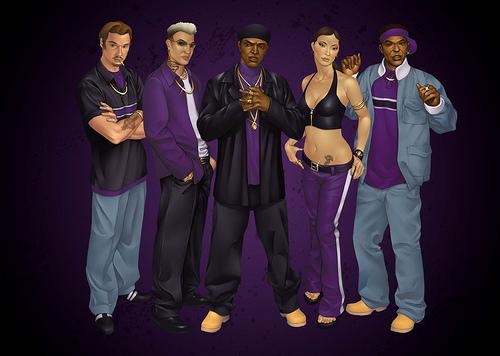 S'up my fellows, how be it hanging?

You may have heard the rumors and even started to jump on the Saints Row: The Third hype train, but until now the third outing in the Grand Theft Auto-gone-bad series has remained unofficial.  News has arrived from THQ center like a snub nosed bullet to the back of a pimped up car - Saints Row 3 is officially coming to consoles and PC in Winter 2011.

The previous outings in the series have made you rise to the top of a criminal empire.  To shake things up, the latest game will start you at the peak, with everything to lose.  You must protect yourself and your people of interest (let us, in this instance, call them 'homies') from a shady new group known only as The Syndicate.  If this Syndicate has anything to do with the Bullfrog game be prepared to be attacked by genetically engineered superhumans - not good.

Being at the top from the beginning is going to change the way the game plays with a reliance on big missions and not petty cash making.  THQ put it thus:

Saints Row: The Third puts you on top of the world, right at the beginning of the game, with all the perks that go along with being the head of an elite criminal organization.  There's no delivering pizza, no shuttling family members about in a long series of taxi missions. Instead, you take all the power of the Third Street Saints and you take the world by storm.

Details are as thin as a supermodel on the cabbage water diet, but this should not stop the Co-Optimus community getting excited.  Saints Row 2 was an excellent co-op game that put fun at the very center of the gameplay.  There is nothing quite like the feeling of two co-op buddies running through a city holding Uzis and being as naked as the day they were born - what sweet memories.  Let's hope that Saints Row: The Third can provide as much insane entertainment.

What would you like to see from the Saints Row Threequel?

Was the language and violence of the last game tongue and cheek enough to be acceptable, or just too far?

Be honest, how many of you ran around completely naked with a traffic cone on your head… it can’t be just me, surely?