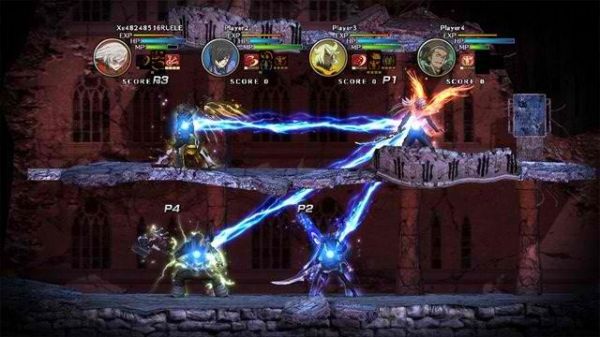 Locke and I decided to play some Moon Diver for our This Week in Co-Op session together. We’d both picked it up on a sale a couple weeks ago, intrigued by its artstyle and over-the-top shenanigans.

We met up on Xbox Live, but had a good ten minutes or so of difficulties getting into a party and a game together. Pretty sure this wasn’t the fault of Moon Diver, but rather some XBL-related issues. After a little sweat and blood had been shed, everything was finally sorted out and we were ready to go save the world (or whatever the plot of this game is - it’s really tough to say). We slashed our way through one level with relative ease, but then got some bad luck on a boss fight and had to start that level over again. This actually ended up being a good thing, though, as it allowed Locke to finally equip some spells.

On our second try through that level, we were suddenly joined by a couple of randoms. We later found out these guys were over level 50 (yeah, we were level 14), and proceeded to watch in awe as they lay down some serious smackdown. Their spell combos (many of which we were able to join in on) were much cooler than our lowbie ones, doing things like throwing deadly barrages of magic bolts, granting group invincibility, or super group-healing. One of our high-level buddies (Green Dude, I dubbed him) led us down into a secret area where I’m pretty sure we experienced an acid trip, but fortunately it was a pretty goddamn cool acid trip. After fighting a ton of enemies and staving off spinning laser platforms, we emerged victorious and unlocked a new spell. Thanks random high-level players!

XBL servers glitched again, and Locke was disconnected in addition to Green Dude. Locke was able to make it back in, but alas, Green Dude did not return. Fortunately for us Moon Diver newbies, we still had high-level Red Guy to power us through the rest of the act. Good thing, too, as we totally would’ve failed the act boss if left up to our own devices. Red Guy totally carried us, slashing us back to life when we died to the act boss (multiple times), and group-healing us when our newb asses kept getting goddamn hit by the huge laser.

All in all it was a pretty fun time. Moon Diver was as ridiculous as we’d both hoped, and we had a positive experience with our random co-op buddies Green Dude and Red Guy. And hey, we got 5 gamerscore out of the evening!