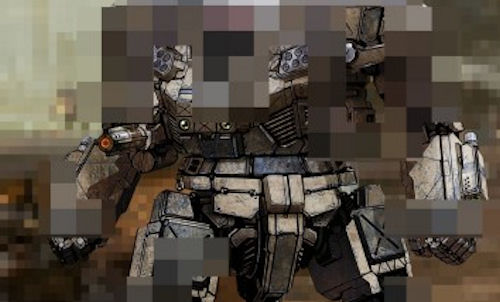 It's been more than two years since a new MechWarrior game was announced.  Now it seems details are about to resurface for the Piranha games developed reboot of the classic PC series.  Over the past few days a new twitter account has gone live; the Inner Sphere News is currently tweeting "encoded" pieces of a larger image of a some form of Mech.

The images seem to be released at different intervals, presumably when the ISN twitter account adds more followers.  Sadly little other details about the game are available, though according to a recent interview with Piranha Games President Russ Bullock, it seems more details are definitely coming soon.  He had promised "more details within a month or so" on September 30th - so it looks like we're right within that time frame.

The MechWarrior reboot was announced as a PC and Xbox 360 title with a four player co-op campaign.  The game is being co-developed with Jordan Weisman, who is the founder of FASA and creator of the Battletech universe, of which the MechWarrior games are part of.