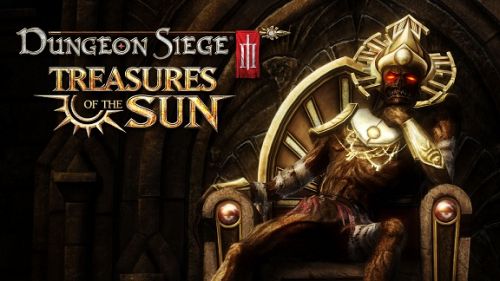 Some of the best co-op experiences come as a surprise and this was the case with Dungeon Siege 3. Despite the issues with the camera and co-op experience, it was still really fun game. However, it lacked something - mummies. This oversight has now been resolved with the newly released Treasures of the Sun DLC available across all platforms.

Treasures of the Sun is out now and costs 800MSPs, or $10 real money for PS3 and PC users. Included in this price is a whole new mission set in the land of Aranoi Desert (so close to sounding like a delicious pudding, Aranoi Dessert yummy). The 4 player co-op mode will return in the all new adventure that leads across the desert to a forgotten abbey that holds a long-lost secret.

The DLC has new features for players who have completed the retail game; the level cap is increased to 35, new skills have been added, and all new monsters roam the land, including non-maternal Mummies and other walking dead (dead not dads):

New abilities: Players are now able to attain mastery of the arcane through powerful new attack, defense and healing abilities.