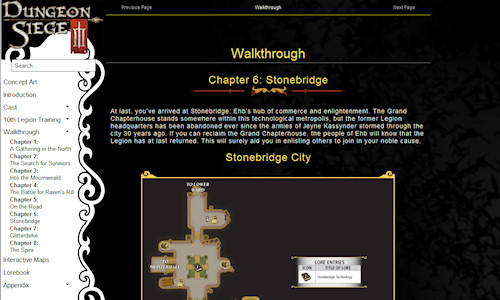 Dungeon Siege 3 is set to receive some DLC in the coming weeks, which means now is a good time as ever to head back into the kingdom of Ebb and wrap up some of those missing quests and find those rare items.  Recently Prima Games contacted me to see if I was interested in checking out their offerings in the realm of digital strategy guides.  In the day and age of the internet is something like this even still relevant?  Once you fire up one of the digital guides, it's easy to see the production values are signifcantly higher than what you'd find on YouTube or GameFAQs.

Looking specifically at the Dungeon Siege 3 guide, you get a lot of what is often offered in the print version, but in a much more navigation friendly interface.  Sure, turning pages isn't hard, but the point and click nature of finding exactly what you need as well as the ability to actually search the entire guide is slick.

The guides offer concept art, an introduction to the story, a look at the characters, skill and weapon guides, a walkthrough as well as the biggest feature - interactive maps. The maps themselves point out not only hidden treasures and loot, but offer video clips of key moments in the game.  I know I've been guilty of trying to YouTube a solution to a certain area in a game, so this is a decent equivalent.   We were also told that for major changes to game via patches and such, Prima has the ability to update the digital guide - something obviously not possible with print.

Sadly there's one downside I've found, at least with the Dungeon Siege 3 guide, there's rarely a mention of co-op play.  There's a ripe opportunity here for co-op strategy - especially for some of the boss fights - but for whatever reason they seem neglected.  I'd love to see a section in the guides focused on cooperative play.  *HINT HINT PRIMA*

Another small annoyance,  being only available on PC definitely limits the market, since console gamers might not want to go back and forth between a PC while playing.  So you'll need to have a laptop handy or an iPad (which can't play the videos).

The digital guides are priced the same as their physical counterparts, $19.99 - but offer significantly more information that just isn't possible in print.  Alternatively you can buy them bundled with a game on Steam for only $10 over the normal game price.

Most of the digital guides do still offer a print version if that's your thing, but it seems the future is in these more dynamic and interactive guides.  Prima suggests that these guides are just the beginning and they've already started to create iPad versions of the guides that are available on the app store.