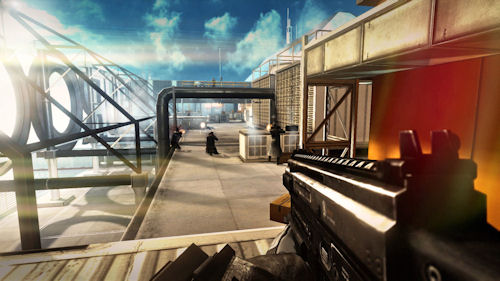 EA has just released a brand new trailer for Syndicate, the upcoming shooter based on the classic 1993 game.  While we went hands on with the single player portion and were teased with the details of co-op, we didn't get a chance to see the online four player co-op in action...until now.

The two minute trailer still doesn't give hard details of what co-op play will entail, but we can deduce a few things just by picking out what's on display.  It looks like players will be able to create and possibly customize a character - or possibly what is being inferred is - different character classes are required for different missions so you'll have to choose from some pre-defined characters.  You can see there's an agile class of character, like the one doing the Mirror's Edge style slide kick as well as you're heavy gunners wielding some pretty impressive firepower.

It's great news that despite the long lead in rumor time to this game, once the official media campaign kicked off, we won't have to wait long to get our hands on Syndicate which is being developed by Starbreeze.  The game is out on the Xbox 360, PlayStation 3 and PC on February 21st, 2012.

One final note - if you enjoyed the music from the trailer, it's available to download free from the Syndicate Facebook Page.