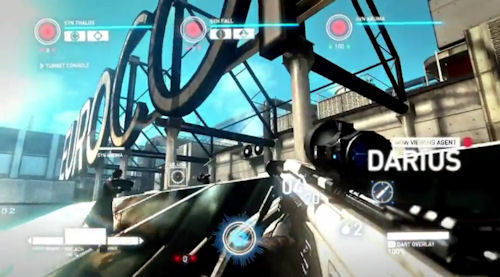 EA has put out a brand new trailer for Syndicate which contains 8 minutes of co-op footage from a mission called "New England."  In it we see four players, each with their own character, breaking into a facility to steal a chip out of some dude's head.  Yeah - sucks to be that guy.

There's some pretty interesting co-op tactics on display.  We see certain players with a breach ability to remotely heal other players as well as remotely revive a downed player.  In fact, it's tough to see, but it looks like the breach abilities (think remote hacking) of enemies and other devices plays a big part in co-op, just like the single player.

The latest dev diary explores some of these concepts.

The heal and reboot breach mechanisms that we had previously created for the competitive multiplayer was proving to be the perfect glue for our co-op experience. We were also starting to see and encourage different player roles such as healers, assaulters, snipers, supporters etc. and introducing breach applications, which are small breach programs created for a very specific task, enhancing the different player roles even more. More and more the co-op experience was quickly becoming much more than just a shooter.

Syndicate  is out on February 21st, 2012 on the Xbox 360, PlayStation 3 and PC with a four player online co-op campaign that's separate from the single player.