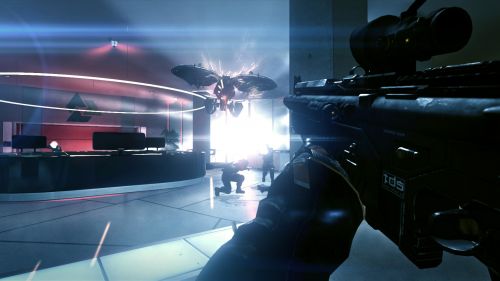 In my recent Syndicate review I mentioned a great scenario in which three of us managed to take on a particularly tough level and come out victorious.  The actual scenario turned out to be one of the final levels of the co-op campaign.  The most amazing thing about our victory was that my two partners, Mike and Andrew, were only level 1 or 2 characters with minimal upgrades as they had just gotten the game.  While my level 14 or 15 was nothing to scoff it, it still showcases how balanced Syndicate's co-op can be even with an unbalanced team.

As I said in the review, Syndicate's co-op missions are designed for four players.  It's actually bizarre, but if you look at the mission in the menu every single one says "recommended number of players: 4."  Why even list it if they are all the same?

So with that we jumped into the mission and began to dismantle a rival Syndicate with our strategy and our bullets.  There are several instances where working as a team becomes a huge advantage.  Remotely breaching an object, like say a turret, becomes crucial when more players are breaching it at the same time - saving you valuable time in the mission and lessening the number of bullets being sprayed at you.

This same holds true for the mini-bosses of the levels, those annoying dudes with the armor you need to breach first before making them vulnerable.  There were several times we had to do this where one person basically acted as the bait, drawing the heavy enemy's fire while the other folks in the group worked on breaching his armor and bringing him down.  One particularly difficult situation put us in a small room with a heavy enemy that had a flame thrower.  With almost no cover and a steady stream of guys it was a frantic action of trying to put SOMETHING between you and a wall of fire while the team dismantled him as quickly as possible. The level culminated with a boss battle against four rival agents.  Being as their were only three of us, we couldn't go one for one.  To make matters worse, if you've played Syndicate in co-op, you know that rival agents are capable of healing and reviving each other too - which means the only way to completely disable them is to bring them down together or to rip the chip out of their head.

We tried a few tactics, doing some hit and run - covering high and low.  But nothing seemed to draw the agents out of the room they were parked in.  Mike with his sniper rifle was definitely annoying them as I danced around the entrance taking pot shots at whatever agent was closest to me.  Andrew was finally able to draw one off and we quickly isolated him and took him down.   1 down, 3 to go.  The suddenly we were overwhelmed by grunts.  We had no idea we'd have more to deal with.

After a restart - thank you checkpoint system - we were at it again.  Using the same method we'd slowly pull agents away one at a time, isolate, and destroy.  Finally there was just two left.  We concentrated on the one and as his health faltered, I charged in and ripped out his cheap right in front of his buddy.  This demoralizing action surely tipped the scales as Mike and Andrew finished off the other guy and onward to victory.