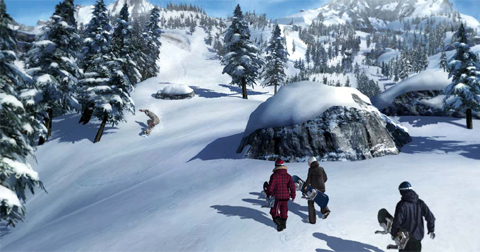 Now, I realize as I type this that I'm dangerously close to starting an unwarranted hype train here, so let's be clear: I'm excited for this game. You don't have to be. In the meantime, however, just know that while cooperative modes seem to be all the rage, it's rare enough to see a game with 4-player co-op, much less 16.

If you're crafty enough, you can guess the title by looking at the list of new games added, because I just added this one today for Xbox 360 and Playstation 3. If you like surprises, however, you can hit the "Read More" link for screenshots and details about what just may be the co-op sleeper hit of this holiday season. This screenshot is called "Friends In The Wilderness".

Shaun White Snowboarding will be shipped on November 16th by Ubisoft, and is developed by Ubisoft Montreal. If you're not familiar with this developer, shame on you: they're responsible for top-notch titles Assassin's Creed, the Tom Clancy's Rainbow Six 3 and Vegas series', the Prince of Persia reboots, Tom Clancy's Splinter Cell and Chaos Theory, Far Cry Instincts and Far Cry 2, plus many more that have received various critical reception.

To start off, players will create a unique snowboarder, and then dress them out according to their liking. How detailed this process will be is a mystery so far. Once the player is satisfied with their avatar, they can hit the slopes at any of three areas (peak, back country, or resort) for each: Japan, European Alps, Park City Utah, or Alaska. A special edition sold only at Target stores for an additional $5 for all console versions will include Target Mountain, Colorado, as well as extra character content (none of which will be available for DLC, according to the current plans).

Ubisoft has a lot of faith in this game, as they have posted $10 million in advertising, beating Valve to the punch.