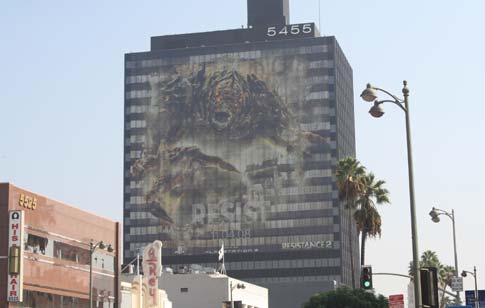 With 8 player co-op title Resistance 2 a short few weeks away, the marketing campaign has kicked up in a BIG way.  The above picture is for a building size ad for the game featured in download Los Angeles.  Luckily no office workers were harmed in the making of said ad, though a few screamed in fear before having their morning coffee.

Gotta say, that's one of the more innovative ads I've seen.  That giant Leviathan is actually a boss in the game players must take down; though it's not known whether or not he makes an appearance in co-op play.

Hit the read more link for another pic.