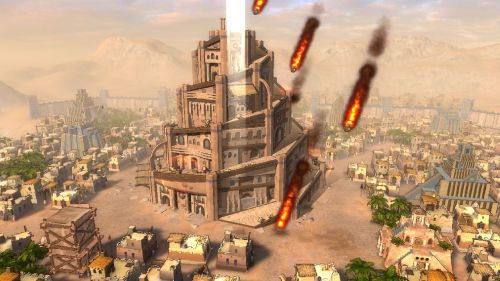 Babel Rising is one of those clever iPhone games in which you get to be mean to digital people without feeling bad about it. Based on that tower of Babel story, players take on the role of a vengeful god as he/she/it knocks down a tower meant to reach the heavens. Next year you’ll be able to dish out divine wrath on XBLA and PSN courtesy of Ubisoft and French developer Mando Productions.

3D graphics are just the tip of the console upgrades iceberg. Rather than remapping the original game’s touch controls to a controller, Babel Rising with utilize motion controls courtesy of the Kinect and Playstation Move. Considering how different the two control methods work, it will be interesting to see how each version turns out. Oh, and best of all – Babel Rising will include new co-op and competitive multiplayer modes too.

The makers of Babel Rising promise the game is coming sometime in 2012 – after that, they rest.