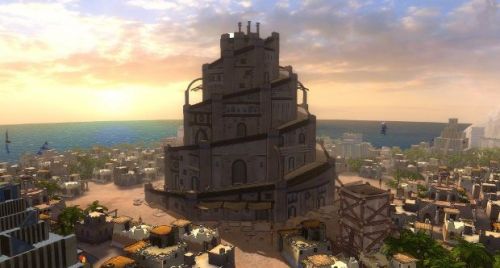 As successful iPhone game now going 3-D, Bulkypix’s upcoming title, Babel Rising, puts you in the place of an angry god looking for some sinful humans to sacrifice.

Many know of the story of the Tower of Babel; a structure made in ancient biblical times, where one of the earliest groups of people wanted to build it so great and so high that it would reach the heavens, mainly in order to challenge God himself. In short: man wanted to show God just how equal in power they were to each other. Unfortunately for them, God cooked up a plan of his own to show them they aren't equal. Since everyone spoke the same language, he casually changed the languages of all the people, making it impossible for anyone to understand each other to get the tower finished.

But the history lesson aside, this game is practically an exact revival of that biblical story, putting you in the hands of God as the people are trying to finish what they start. The only difference here is that you aren’t trying to confuse them through speech, but are trying to brutally obliterate every last one of their asses using your heavenly might. With a good handful of holy powers, such raining down hellfire, using lightning strikes, or even creating massive floods, the objective is to keep the people from completing their tower and basically "sticking it to the man". You are God (probably not the Christian God, but more like a Greek one), so show them who's boss!

Here, take a look at some of the game's trailer in action and see what kind of powers you'll have at hand when you play it yourself:

While on Bullpix’s official website of the game, it does say this game will support Kinect and PlayStation Move capabilities (probably using your body to rotate the screen around the tower), we still have yet to know how many players total it will allow for co-op/multiplayer.

No word on the 2012 release date or price tag of the XBLA version of the game at the moment, but we’ll be sure to fill everyone in once we know more. In the meantime, check out some new screenshots of Babel Rising below!