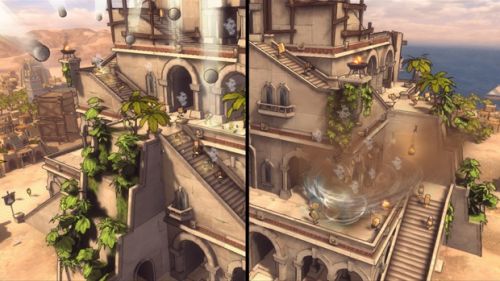 Here in the UK the sun has finally come out and a summer to remember is just around the corner.  June promises to be a good one this year; a four day weekend for the Queen's Jubilee, a European Cup to look forward to, the Olympic Games on home turf and Babel Rising finally comes out on PSN and XBLA.

Ubisoft have released some new images of Babel Rising as well as a new video.  It is on said video that the date is revealed - June 2012.  They have also released a set of handy key features to give you an idea how the PSN and XBLA versions differ from iOS:

Prevent the Rise of Babylon

Thwart a wide variety of Babylonians united in their desire to build the tower, always looking for the quickest path to the top. Workers carry stones , priests protect workers from spells, and siege towers help them access upper levels faster.

You are in Control of the Elements

Unleash devastating elemental attacks based on fire, water, earth and air, each with a unique effect depending on the target. Throw fireballs, release tornadoes, rain meteors, and much more. As you progress your powers become deadlier and more powerful than ever.

Command the elements and punish arrogant Babylonians with your own unique movements via PS Move or Kinect for Xbox 360.

Battle with or Against Friends

The most intriguing aspects are the co-op mode and the motion control.  How these will be implemented have yet to be seen, but with only 5 or so weeks to go until the end of June we will soon find out.  In the meantime here is the trailer and images to enjoy: