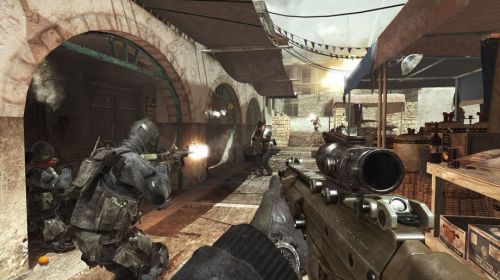 Stay tuned for our Spec Ops playthrough videos coming out in the near future.

How many players does Modern Warfare 3 support in co-op?

You can play 2 players in either co-op mode, Spec-Ops Missions or Spec-Ops Survival.

Can I play split screen in Modern Warfare 3 co-op?

Yes. All you need is to have another controller plugged in and press start.

Can I play Spec-Ops via LAN?

While the versus supports LAN play, the co-op does not.

What modes are available for co-op in Modern Warfare 3?

You can play Survival on 16 maps or Missions on 16 maps.

What are missions are there in Spec-Ops?

How is mission progression handled in Spec-Ops?

Players will earn stars depending on what difficulty they chose for a mission. Completing a mission on normal earns you one, hardened earns you two, and veteran earns you three.

After so many stars are earned you'll unlock the next tier of mission. 16 stars is enough to unlock all 16 missions.

What does the player level do in Spec-Ops?

Spec-Ops has a completely separate player progression system that's very similar to the versus multiplayer. As you play missions you'll earn experience which counts towards your co-op level. Each time you level up you'll earn unlocks which are used in the game's survival mode.

These upgrades and unlocks include not only weapons, but upgrades to the weapons as well as abilities to call in like a predator missile or a turret.

What guns are available in Modern Warfare 3's co-op? When are they unlocked?

What weapon upgrades are available and what level do they unlock at?

What air support or perks are available and what level do they unlock at in Modern Warfare 3?

What equipment is available in Modern Warfare 3 co-op to unlock?