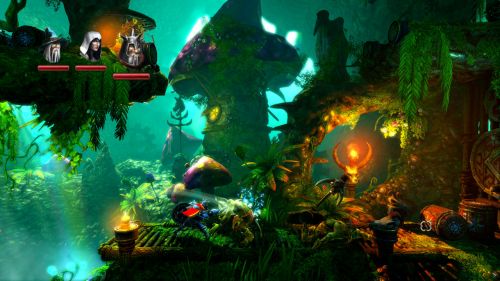 Frozenbyte has confirmed some swanky features for the PC version of Trine 2, which releases early next month.  The game will utilize Steamworks for achievements, friends, and matchmaking for the three player co-op mode.  Best of all - PC and Mac users can play the copy on either platform thanks to SteamPlay support.   Even better, the game allows for cross platform play between the PC and Mac!

Other recent additions to the game include NVidia 3D Vision support.  Looking at the screens for the game in 2D this game seems ripe for some really impressive 3D visuals.

"Trine 2 looks stunning with 3D Vision," Frozenbyte boss Lauri Hyvärinen said. "We knew it was going to be good but it really caught us by a surprise just how great it looks. Trine 2 has been built in full 3D, and while some of this may go unnoticed when the game is played normally, 3D Vision makes it pop out in a way that is just amazing."

Trine 2 will also be released on Xbox Live Arcade and PSN.  All versions support 3 player local and online co-op play.