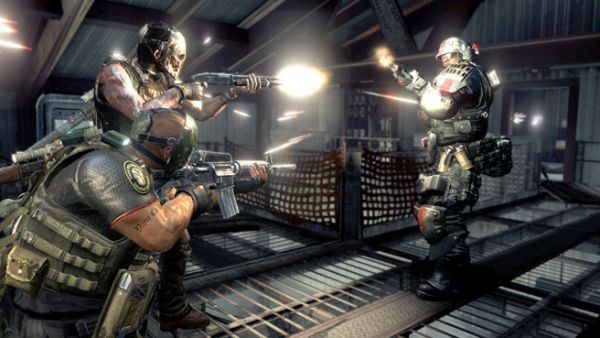 The Army of Two franchise is calling in reinforcements.  Earlier today Kotaku reported that an "EA insider" has informed them that the third installment of the bro-op franchise will be called Army of Four.  As you can probably figure out, it will support four player co-op.  The previous two titles, both Army of Two, and Army of Two: The 40th day, supported two player local or online co-op (The 40th Day had a four player Extraction mode, as well).

The same insider also reported that the developer, EA Montreal, was having problems.  Since the new game is rumored to be using DICE's Frostbite 2 engine, EA has reportedly dispatched members of DICE's Battlefield 3 team to Montreal to aid in development.  If Army of Four takes what we like from the Army of Two franchise and mixes it with what we like from Battlefield 3, we may have one heck of a title to look forward to.

Army of Four is still unofficial, so the co-op information (local, online, combo,) isn't solid.  Little else is known about the as-of-yet unannounced title, but I'm assuming the two main protagonists, Salem and Rios, will be back for more.  I'm curious to see who the new playable characters will be.  I'm guessing a tech savvy female (Alice Murray) and an unknown, grizzled vet.  What do you think, dear reader?