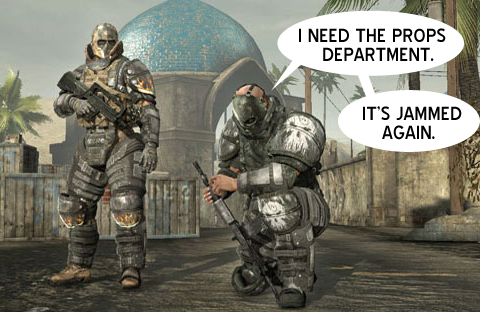 Earlier, we heard wind of an Army of Two sequel coming down the tubes. Now, it seems that Electronic Arts will capitalize further on the underappreciated co-op game with a movie. Universal Pictures will distribute the big-budget film, and is fast-tracking to start full production in 2009, with Scott Stuber producing in the first partnership with EA.

Attached to write the screenplay is Scott Z. Burns, who is credited for the Bourne Ultimatum script.  Says Burns about the project (after the "Read More" link):

Because people experience the game in pairs, playing two guys who go against the world, Scott and I agreed this format presented an opportunity to make a great buddy film.

The ambiguity of these private military corporations lends weight to an intelligent thriller with relevance to what's going on in the world right now. You have contractors with their own agendas, and two guys whose friendship supersedes all the politics. I told EA right off the bat I wasn't a gamer, and that appealed to them because they didn't want to simply replicate the game.

Co-Optimus user justabaldguy has his money on Nic Cage, but I disagree: Christian Bale and Samuel L. Jackson seem to crave franchises that are growing out of control...they'd be perfect!