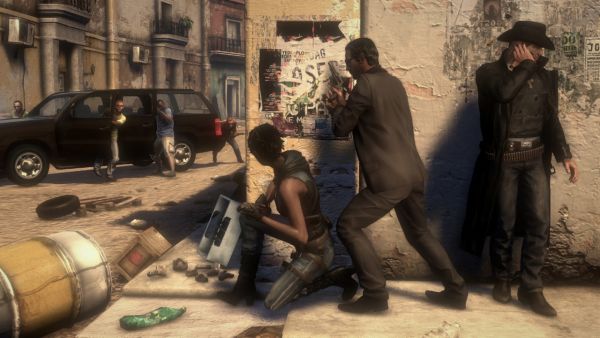 Wow, that last Techland game I played was excellent.  Not Dead Island, but Call of Juarez: The Cartel!  It had everything; glitches, poor controls, mediocre gameplay - it was ace.  Or perhaps it was not.  Co-Optimus gave the game a limp 2.5 and the co-op was one of its few saving graces.  Can we as a community prevent anything like The Cartel from happening again?  Perhaps we can, if we fill out Ubisoft's questionnaire about a potential 4th game in the series.

For fans of the first two Call of Juarez games, the third outing was not only a shift away from the usual Wild West setting, but also a shift away from solid game design.  With The Cartel failing to gain many friends, or sales, it would make sense that Techland would retire the franchise in favour of their freshly minted Dead Island series, but it appears that Ubisoft still want a slice of the cow(boy) pie.

Some members of Ubisoft's Uplay system have received emails from the publisher asking them what they would like from a potential 4th instalment - no glitches and decent gameplay are not options.  They do ask what elements of the the third game you enjoyed most, including being part of a team, but putting your own interests first:

The questionnaire is an opportunity for gamers to hate on all elements that sucked in the game, but praise the one gameplay mode that actually improved things; co-op!

As well as asking a bunch of inane questions about The Cartel, the survey also offers some potential scenarios for Call of Juarez 4:

More than one of these scenarios has some great co-op potential, as long as Techland remember to actually finish the game before releasing it.  Perhaps Ubisoft are planning to take the series away from the Polish developers and hand it to one of their in house teams?

Do you think they should make another Call of Juarez game and, if so, what should they improve?

Personally, I like the idea of Call of Juarez 4: Call of Duty, a game set slightly in the future about a bunch of soldiers, who happen to have Texas accents.