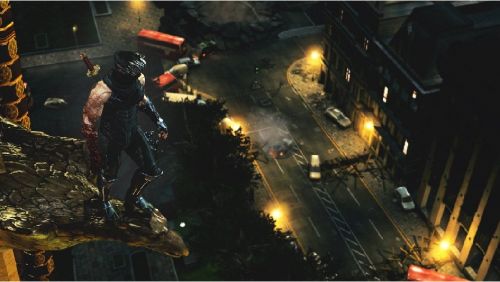 Ninja Gaiden 3 has been priced and dated, and the obligatory Collector's Editions and preorder exclusives have been detailed.  You can get your ninja fix for the Xbox 360 or PlayStation 3 on March 30th, 2012.  NG3 looks to be more brutal than any previous entry, focusing on the consequences facing Ryu Hayabusa after years of chopping people into gooey, meaty chunks. Check out the following video to hear some of the noisiest ninja killing, ever.

This is what happens when you eat a microphone and then get chopped up by a ninja.

The preorder bonuses are exclusive to Amazon and Gamestop.  A preorder will get you a playable demo for the upcoming fighting game, Dead or Alive 5, which will be out later this year.  Amazon preorder customers will have access to Ayane and Hayate, while Gamestop patrons will be granted access to Hayabusa and Hitomi.  If you're not familiar with the Dead or Alive franchise, it looks kind of like this... Ninja Gaiden 3 will also have a $100 dollar Collector's Edition, exclusive to Gamestop and EB Games.  The CE will include all four Dead or Alive 5 demo characters, as well as "an exclusive Ninja Gaiden 3 'Unmask' game art book, soundtrack CD, and a unique 'Duel of the Masked' figure not available elsewhere."  Sounds like a nice piece for any devoted Team Ninja fan.

Have I mentioned that Ninja Gaiden 3 will have co-op?  Because Ninja Gaiden 3 has co-op.  Just throwing that out there.  I did some hardcore sleuthing (clicking) over at the Team Ninja website and found a few pieces of co-op information that you may or may not be aware of.  It appears that the co-op gameplay will be limited to two players.  The co-op mode may simply be called "Ninja Trials."  These missions will be some of the hardest in the Ninja Gaiden series.  At least, that's what I got from this:

Join with another ninja to take on co-op Ninja Trials. Learn from the best or show another rookie ninja the ropes as you take on some of the hardest team missions in the Ninja Gaiden series.

The co-op will be an online-only affair, the latest press release says as much.  So... there you have it.  If the "Ninja Trials" are as difficult as Ninja Gaiden (2004) you can take my copy and throw it in the trash right now.  That was one of the most difficult games I have ever played.

I'll leave you with two more Ninja Gaiden 3 videos.  The first covers a little bit of the plot, which involves a terrorist organization and zzzZZZZzzz....  Sorry.  I doze off whenever I hear about a terrorist plot in a video game.  I'm sure it's gripping.  The second focuses a little more on those consequences that I mentioned earlier.  I sense a good/evil decision system!  Okay, so these devices may be a little played out.  At least the game doesn't focus on something totally overdone, like zombies. It hinges on something new and fresh: ninjas.

Seriously, Ryu may want to think about getting a silencer for that sword.