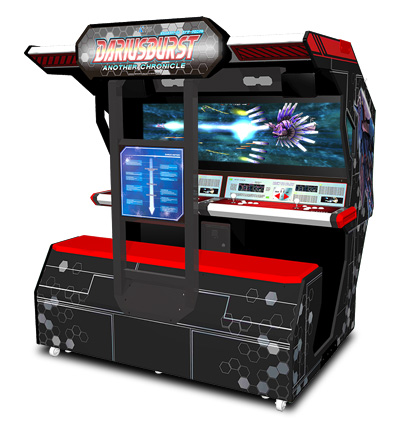 The Darius series of shoot-em-ups has long featured 2-player co-op play. While Darius originated in arcades, it’s far more likely that Co-Optimus readers first played Darius Twin on Super Nintendo/Wii or Darius Gaiden on Saturn/etc. The last home release, Dariusburst for PSP, sadly didn’t see release outside of Japan (but it was single-player anyway). When the arcade sequel, Dariusburst: Another Chronicle debuted in Japanese arcades last year, nobody expected it to receive a worldwide release. Now, quite surprisingly, Taito has started taking orders for an English language version of the machine.

The original Darius machine used three side-by-side monitors to create an extreme widescreen view, much like Konami’s X-Men. Dariusburst: Another Chronicle uses dual widescreen monitors to create the same effect. All that room comes in handy for the game’s 4-player co-op – a true rarity in the shmup genre. A Viewlix setup with four Sanwa joysticks ensures that everyone has the best possible control over their Silverhawk ships. Finally, the seats (!) have built-in speakers which blast players with bass at key times like the start of a boss battle.

Darius Gaiden is one of my all-time favorite shoot-em-ups – I’m enjoying the Japanese soundtrack as I write this. I would kill for a home version of Another Chronicle, though such a release is unlikely due to the dual-monitor setup. Then again, the first game got ported to a handful of consoles, so anything is possible. In the meantime, players who are lucky enough to live near a surviving arcade should encourage the proprietors to order Dariusburst: Another Chronicle as soon as possible.

Our sincerest thanks to Adam for the tip!