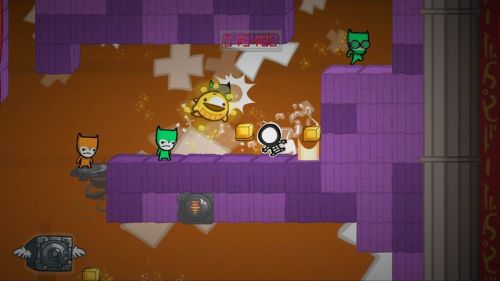 Developer The Behemoth has been churning out new  BattleBlock Theater prisoner profile videos for a few months now.  We've already included some of the inmates in several previous posts, but it appears there's no rest for the wicked, and even less rest for those falsely imprisoned and then forced to perform bizarre plays/battles "for a bunch of deranged cats."

There's this evil hat, you see, and some quantum gemeralds... Confused?  That's okay, just check out the official trailer.  Even more confused?  Then watch the opening cinematic.  There.  Clear as cardboard.  Still having a hard time keeping up? Don't worry, we've got you covered!

Feast your eyes (What the heck does that even mean? Are our eyes eating? Horrifying.) on the fancy prologue, complete with stick puppets.  STICK PUPPETS!  If that doesn't explain everything, we've got seven new prisoner videos for you to watch.  Deal with it!

Oh, Round-Headed Friend, whatever are we to do?

I made up my own descriptions of each prisoner based off of their own person video.  Feel free to do the same. Behemoth has ridiculous dossiers on each inmate at their site, but I think they're open to interpretation. The vids not only showcase prisoners, but they also demonstrate the many power-ups available in the game.

Prisoner #10298 appears to be some type of flying cloud cat.

Prisoner #10321 is a handsome companion.

Prisoner #10312 and #10329 have two eyes between them.
They also give us our best example of the competitive/cooperative  gameplay to date!

Prisoner #10326 likes fingerstaches so much he drew one on his face.

No one knows when BattleBlock Theater will be released.  We do know the game will be available for the Xbox Live Arcade, and will include, at the very least, two player local or online co-op.  One video, #10304, displayed three (possibly four) characters "working" together.  It's also apparent that you can kill your buddy at any time. Fun!  We'll keep you posted!