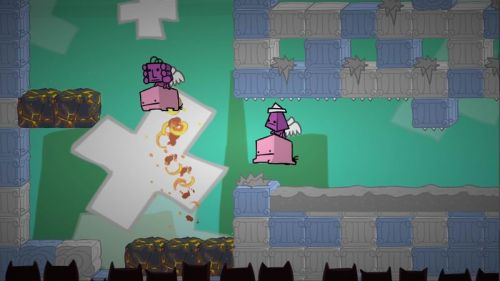 Last week we brought you copious amounts of videos from BattleBlock Theater, The Behemoth's follow up to the fantastic Castle Crashers.  This week we have four more prisoner profiles.  These dastardly villains have been convicted of heinous crimes including, but not limited to: "Necromancy," "Attempted planet wide takeover," "Too much sadness," "Plastybolsaphobia," and "Existence."  Terrifying, I know.

Each video highlights a new gameplay feature.  Check them out and get a feel for BattleBlock Theater's unique combat/platforming weirdness.

Prisoner #10307 is not afraid to step on others to get ahead.

#10330. The Jack Donaghy of BattleBlock Theater.

We expect BattleBlock Theater to release some time this year.  Right now, it is an Xbox LIVE Arcade exclusive. We know it supports two player local and online co-op, and it looks like four players might be available.  We'll let you know when we find more information.