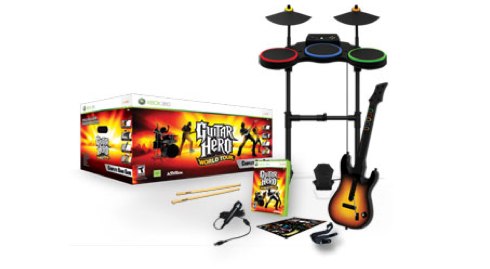 It's like an echo through time of one year ago.  A major rhythm game with cool new hardware is released, and angry gamers find that their expensive plastic instruments aren't working properly.  This time, it's Guitar Hero: World Tour, though, and not Rock Band that's the culprit.  Joystiq reports that the most common problem seems to be broken cymbals, followed by drum heads and then the new guitar controller.  Unfortunately for GH fans, the Activision warranty isn't quite up to par with Rock Band's: players must ship back controllers at their own expense.  Hopefully, if the problem is indeed as widespread as Rock Band's were last year, they will change their customer service policies.  In the meantime, you might try your luck returning your gear to your local retailer.

We picked up the entire band bundle for 360 yesterday, which is no surprise since my love of the fake instruments is well documented.  My initial impression is overwhelmingly postive.  The drum controller is superior to my original Rock Band set in almost every way.  The construction is sturdier, the pads are quieter, and it's far easier to adjust to your comfort.  The drums work flawlessly in Rock Band 2, as well.  The guitar controller for GH:WT is very, very nice.  The major addition is the touch sensitive neck area, which you can actually use for strumming.  Additionally, you can slide your finger on certain parts of songs, for that Eddie Van Halen feel.  My son was quite enraptured by this feature, but I found it a bit fiddly, though still fun.

You can expect our full review of the game and peripherals soon.  In the meantime, is anyone else having problems with their GH:WT hardware?