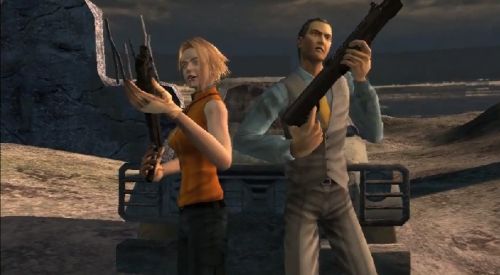 Get your light-guns ready!  Or wands, or glowing stick-balls, or whatever the heck those PlayStation Move things are called.  The House of the Dead 3 and The House of the Dead 4 are coming to a PlayStation 3 near you.  The gory on-rails light-gun shooters have been upgraded with HD graphics, trophies, and Move support.  You can use a normal controller if you prefer, but that's kind of like taking a shower in a rain coat, if you know what I mean.

The House of the Dead 3 will be available for download on February 7th.  It was originally released in arcades way back in 2002.  It has appeared on the original Xbox, and more recently as part of a combo disc that included House of the Dead 2 for the Wii.  I played it on the Wii, and I remember it was tough.  There were limited continues, and the enemies were tenacious.  Hopefully the PSN version has a free play mode.  Judging from the following video, it does.

The House of the Dead 4 was released in 2005.  It has never appeared on home consoles.  Part four actually takes place chronologically between HotD 2 and HotD 3, so we can see what brought about the shattered setting of the third game.  I expect so-bad-it's-good voice acting along with a ridiculous plot involving mad scientists.  I should note that neither of these titles have the pulpy feel of the HotD: Overkill games, or the rampant swearing.  They have a whole level of unintentional campiness which is ridiculous in itself.