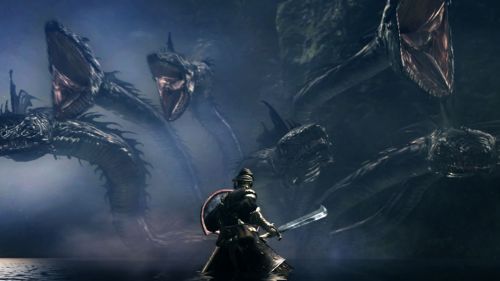 Praise the Sun!  We're nine days into 2012 and we haven't done a Dark Souls article yet?  Truly it is the end of days.  It's about time I fix that.  Over the weekend I received an email from a Co-Optimus community member concerning a petition to port Dark Souls to PC.  That's a mighty fine idea.  The more people playing Dark Souls, the better.  (I'm hoping for a sequel titled Darker Demon's Souls: Back to Boletaria)  I was curious if anyone would get behind the PC petition.  Lo and behold, as of this writing 52,392 people have signed on.

That's 22,377 more votes than Mitt Romney got in the Iowa caucuses, and that noise shut down cable news for a week.  You'd think Dark Souls could get a shout-out from Anderson Cooper, right?  I guess that's why people like myself are around, spreading the good word about Dark Souls.  Nah, not really.  Misery loves company, and misery really loves new, inexperienced, unarmored, can't parry-for-crap company.

History shows that Namco Bandai and From Software are willing to listen to their customers.  When the game first launched cooperative play was severely limited.  Outcry from the player base helped bring about a patch which greatly improved co-op play.  I would like to think we had a little something to do with it, since I openly doubted whether a co-op patch would ever see the light of day.  Apparently my reverse psychology powers work on my dogs, my toddler, and Japanese video game company executives.  The fix worked so well, I changed my review score of the title.  We even made a bad-ass video about it:

I'm the one doing all the awesome.

A PC version of Dark Souls seems like a perfect fit.  There's dungeons, dragons, swords, and sorcery.  The game could benefit from the graphical power of a PC.  At times it didn't run well on the 360.  Maybe if I play on a decent PC I'll finally be able to turn around in Blighttown without getting a migraine.  The high level of difficulty is perfect for the hardcore gamer set.  You know you're not hardcore unless you roll with a mouse and keyboard. The co-op system is awkward and flawed, but somewhat endearing, just like a PC gamer - kidding!  I love you guys.  Some of my best friends are PC gamers!  And besides, if Dark Souls comes to PC, maybe we can kill some of those horrible, horrible, HORRIBLE Skyrim memes.

There's a link to the petition in the source field.  Or you can click here.  You can see all the traction that the petition has gained in the Namco Bandai forums and other gaming outlets here.  Sign it, and count that as your good deed for the day.  Then you can go back to being evil.

Dark Souls is out now for the Xbox 360 and Playstation 3.  It supports three player online co-op.

Thanks for the tip, Zawuhibu.