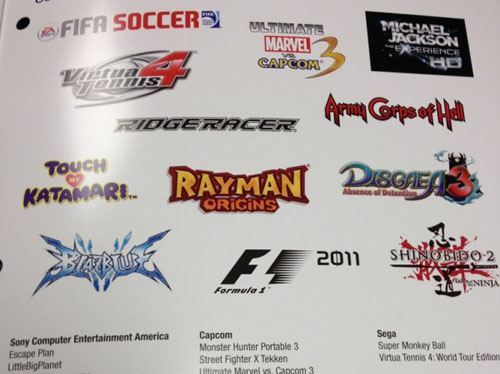 A snapshot of a retail pamphlet lists a plethora of titles that are planned to be released on the Playstation Vita in the USA. Two co-op games that we are excited about are listed; Army Corps of Hell and Monster Hunter Portable 3.

In case you were worried that you were not going to be able to hunt giant monsters on your commute to work,  it seems like Sony is not going to let Nintendo have exclusive rights to the popular Monster Hunter series. Monster Hunter is a gaurunteed hit in Japan, however will the new Vita portable powerhouse cause North American consumers to slay everything with the same fervor?

The other title is Army Corps of Hell, by Square Enix. It looks bananas and seems to combine elements of Pikmin with the look and feel of Diablo, as seen in the trailer we previously featured. Color me curious because I have never seen a more unique marriage of styles and 4 player co-op is always welcome on my portable device.

Both are more than welcome to make their way across the Pacific. Monster Hunter is a staple of the Playstation Portable and is a great fit on the PS Vita. Army Corps of Hell looks to bring something different to the table, backed up by Square Enix power. The only question we have is how will they utilitze the Vita's controls and touch screen to bring a new experience to the player?