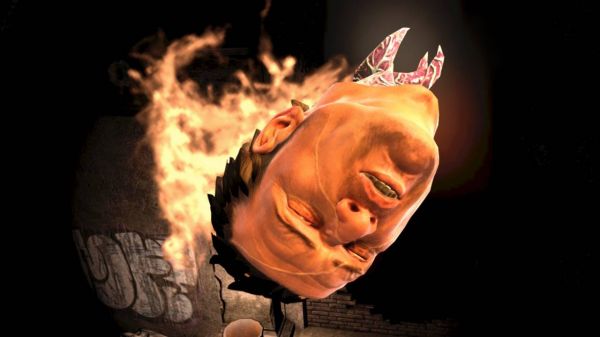 Okay, that headline may be a little misleading.  The screens are new, but the videos aren't necessarily hot off the press. I noticed we have yet to post any videos from NeverDead, and with the game's upcoming release, it seems like a good opportunity to show you guys exactly what this game is all about.  I could just tell you about Bryce, the 500 year old demon hunter, and his uncanny ability to not die, but I think I'll just let you watch these vids instead. The first video is from E3 2010, and it captures the tongue-in-cheek tone of the game:

The next video is from E3 2011, and we can see things are starting to get ridiculous:

The final video is from TGS 2011, and now we get some character names to go with the faces.  Is that a pop star? Sure, why not?

Got it? Good.  Now what about the co-op?  That's a great question.  Developers were hush-hush about the mode when we previewed the game at E3 last year; but it's in there. According to G4tv, NeverDead's co-op mode includes some friendly competition:

There is no story for co-op, only challenges that play out like a sort of roaming hoard mode that is based on time rather than waves. Each of the four players accumulates points during the matches, so while you aren’t trying to kill other players like in traditional deathmatch scenarios, there’s still a clear air of competition to the co-op.

Well, there you have it - another horde/survival mode.  Hopefully the gameplay will keep it fresh.  NeverDead will be out on January 31 for the Xbox 360 and PlayStation 3. It supports four player online co-op.