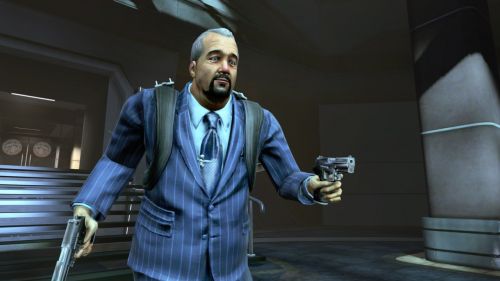 Even more DLC is coming for NeverDead.  I know!  I'm as shocked as you are!  Speaking of shocked, check out that guy in the header image.  He looks like he should be holding coffe mug and a stapler.  Looks as if NeverDead's accountant has been drafted into the demon war.

The suit is actually Chief Sullivan.  He's the new character for the game's co-op mode.  You may remember (how could you forget?) that the first DLC's MP characater was Nikki Summerfield, a scantily clad pop star.  This guy is the follow-up.  Yeah.  Hit the bump to see the other features of NeverDead DLC #2.

New Character: There is a new character available for the online mode, Chief Sullivan of NADA. Utilize his leadership and level-headed nature while trying to keep his body from being torn limb-from-limb

-Egg Hunt: Scour the expanded Sewers level for collectables by delivering them to designated "Score Zones." Make sure to hold on tight to your collectibles as opponents can snatch any that you drop along the way. With enemy ambush points and environmental hazards at every turn, this challenge is tricky!

-Fragile Alliance: A competitive race through a number of checkpoints spread across the map. You can interrupt other players' progress by attacking each other. The increase of environmental hazards and enemy spawn points will keep you on your toes.

-Onslaught: In this challenge, unlock the entire Sewers level by defeating all the enemies. Demon seals that block off areas will dissipate as you defeat enemies from the previous area, providing more controlled player movement and encounters.

Two Additional Character Costumes: Dress Bryce up in these new costumes before going back into the online fray

NeverDead is out now on the Xbox 360 and PlayStation 3.  The new DLC will be out on February 28th.  It's going for $10 on the PSN and 800 MSP on XBL.  Check out the gallery below for images of the new content.