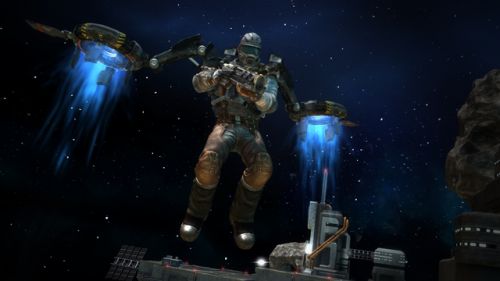 Good news, everyone!  I was browsing through Amazon's Starhawk page and spotted this little gem under the product features:

Offline and Online Co-op Modes. Team up with friends by yourself or on 2 player split-screen to defend your claim against waves of enemies in 1-4 player Co-Op Mode.

So there you have it, Starhawk will support two player local co-op!  Speaking for people who game with their significant others, allow me to say, "Huzzah!" Cue up the Firefly theme song!

In other Starhawk news, we finally have a solid release date: May 8th, but don't let that stop you.  The Starhawk public beta opened today!  Not sure if you want to participate in the beta? Check this out:

How cool did that look?  Pretty damn boss, right?  Before you fire up your PS3, you should know there's a catch (there's always a catch).  Today's beta is open only to PlayStation Plus members and people who took part in the private beta.  Don't get discouraged, there are no less than four other ways to enter the beta in the weeks ahead:

January 31st - Purchasers of Uncharted 3 can redeem the code that was included in the game's packaging.

February 21st - Anyone with internet access can receive their code through the PSN. Congrats, participant!

Granted, the Starhawk beta is a multiplayer versus affair, but you'll at least be able to get a feel for the game if you want to try it out.  You can see more beta details on the PlayStationBlog. The co-op mode is supposedly something akin to a wave-based survival or horde mode. We'll be sure to keep you up to date with any details.

Starhawk will be out on May 8th, exclusively for the PlayStation 3.  It will support two player local co-op and four player online co-op.