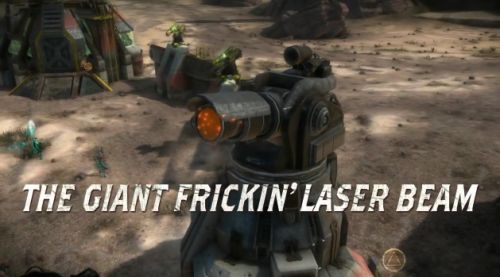 The PlayStation 3 exclusive space shooter, Starhawk, is coming out next week. It's a third person shooter that features space combat, mechs, energy weapons, orbital building drops, and twangy music. It also features a co-op survival mode for up to four players.

PlayStation Blog has recently released some videos detailing the rewards gamers can expect to receive by preordering the game, as well as some special gifts for those of you who took part in the beta. As an added bonus, I tossed in a video showing some of the more clever ways to dispatch your foes using Starhawk's build and battle system. Grab some popcorn and enjoy!

You'll need to preorder Starhawk from Gamestop to get these Limited Edition bonuses.

Beta testers get a glowing hand. They should probably see a doctor about that.

Starhawk supports two player local co-op, four player online co-op, and combo co-op. It will launch exclusivley for the PS3 on May 8th.