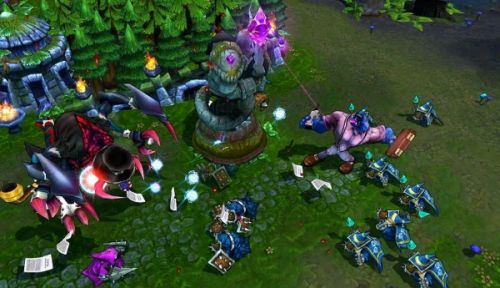 Updating the game's original 12 bot roster to a whopping 40 playable bot champions, players will soon have the tools needed to practice their skills with the newly enhanced AI capabilities of these bots. In addition to this, Riot also added some new playable options to the Dominion game-type as well.

In general, the problem with most human vs AI games is that the AI opponents with have tendancies or predictable behaviors which human players will often quickly exploit (shame on all of us). Well, Riot Games doesn’t just want to make the AI bots more difficult to play against, but seemingly feel like you’re playing against the real deal: human opponents (what any gamer truly wants in an AI).

An example would be for the character, Ashe; a fierce, long range, female archer. League of Legends Producer, Mark Norris, elaborates:

One of the big things was that we had Ashe as an original bot, but Ashe would use her arrow, which was a skillshot. It wouldn't be at all predicted -- 'there's a point to point target there, I'm going to use the Ashe arrow. Now they'll actually use predictive targeting.

AI has always been a difficult obstacle to overcome to make a good game great. I think that's something we, as a gaming community, can fully appreciate when wanting a more co-op friendly experience in League of Legends.

Curious to see who got added and/or buffed? Here's a nice picture the full cast of updated bots, created to work both in Summoner's Rift and Dominion. Riot hasn't given a release date for the update itself, but it should be available on the live servers soon. There hasn't been any official release time of the update, but keep on frequently checking the League of Legends servers within the next few days for the change to occur.