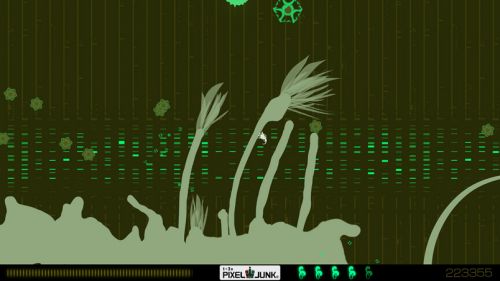 Ever wanted to play the third installment of the PixelJunk series, but only own a PC? Well, tonight’s your lucky night!  Dylan Cuthbert, boss of developer Q-Team, is finally releasing their longstanding PixelJunk series game, PixelJunk Eden for the first time on Steam.

Originally released for the PS3 in 2008, PixelJunk Eden showcased a unique platformer style that was slightly before its time. You control a plant-like being called a “Grimper” where you must navigate it through a slew of vegetation by jumping, gripping, hanging, swinging, and various other methods of motion. The objective is to collect “Spectra” and complete levels before the timer runs out. Sure, it sounds simple enough on paper, but you'll definitely have to try it out yourself to understand Its "acquired" taste of gameplay.

If you don't own a PS3 and have no idea what I'm talking about, check out a gameplay trailer here:

Have a friend handy? PixelJunk Eden allows for up to 4 players to join in the fun and play cooperatively. Just remember to keep close together (otherwise you'll respawn constantly) and “grip” together frequently to reach unobtainable heights. For only $10, PixelJunk Eden is a decent co-op steal for a solid price tag.

PixelJunk Eden will be available on Steam at 10AM Pacific Standard Time tonight.