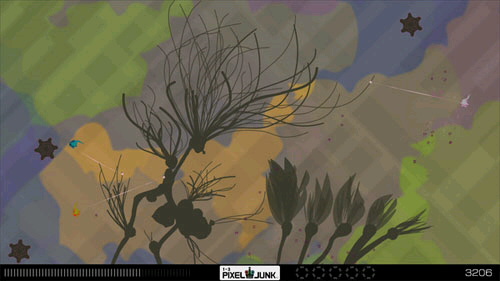 When I first heard about PixelJunk Eden, the latest downloadable game from indie PSN developer Q-Games, I was intrigued by the concept.  Early reports describing the game often concluded that describing what the game’s about doesn’t do justice to what it’s like when you actually play the game.  After playing through the first garden and watching the world that I was interacting with grow and expand as a result of simply collecting pollen, I agree.  The gameplay experience is hard to describe because it’s one of those cases where you just have to go with the flow and let the game be what it is.  It is that experience that makes the game so much fun and worth playing.  So it could only improve by playing and sharing that experience with a friend, right?  Unlike the single play experience, playing the game co-op means having to go against the flow some and define an altogether new experience by shifting from a goal-oriented mindset to a co-operative free play.

The overall goal of Eden is to guide your Grimp (the name of your in-game avatar) through 10 different gardens, collecting the Spectra in each of them in order to make your home garden grow and become a vast, lush, and psychedelic playground.  Navigating those 10 gardens involves a combination of jumping and flying from plant to plant, the latter of which is achievable due to the game’s physics and swinging mechanics.  Being able to swing your Grimp around and around, gaining momentum as you go, until you can hurl yourself to the next plant is not a skill that’s quick to pick up.  Which raises the first bump for the co-op mode, the game mechanics.

This is not a game where a person who’s never played before could just pick up the controller and start swinging and jumping around as easily as someone who’s played through all 10 gardens.  It takes some time to learn the way the physics and motion of the game works, and get good enough at swinging to be able to smoothly move about the gardens.  Of course, you could take all the time in the world to learn, if there weren’t a timer (called a “synchronization meter”) that limits how long you can spend in the garden.  While objects in the garden can refill the timer, it mostly just puts a damper on the fun of exploring the gardens and learning the controls.  Still, the mechanics and the timer aren’t that bad, and were they the only problems, Eden’s co-op mode would be really good.  Combine the mechanics and the timer with a lack of split screen and a penalty (albeit slight) for players getting too far apart from one another, however, and the benefits of playing with a friend quickly start to diminish.


The gameplay requirements and restrictions hint towards a co-op experience that may be more rewarding for players who are really good at the game, but it also covers up the true beauty of Eden’s co-op mode.  Neither I, nor my friend, are exceptionally good at this game.  We both have played it some on our own, and more or less understand the mechanics of the game.  When we played together, we became separated no less than 15 times in just one garden, which invariably led to slightly increased tensions between us.  Some of those feelings were ameliorated, however, when we launched our two Grimps at each other, collided in mid-air, and then sprang off one other in the opposite direction.  It was one of those “poetry in motion” moments that left us both a bit shocked, and it just kind of clicked.  The mechanics and restrictions of this game really dampen the co-op experience as a whole when you play the game to achieve the game’s objectives.  However, if you just ignore them and play with your friend to have fun and maybe grab a Spectra or two along the way, the game becomes so much better.  Working together to have fun and eventually make your garden grow: now that is a truly rewarding experience.

The Co-Op Experience: Players work together to solve physics based puzzles.In this psychedelic platform game, the player will find themselves submersed amongst towering alien plant-life. Within this constantly evolving and vibrant environment, the player leaps and swings between the lush plants, smashing into bizarre enemies and navigating around the undergrowth to gather treasures and pollen to grow more plants. Through various levels, the player is treated to stylish 1080p graphics, a unique techno soundtrack and addictive fluid gameplay. [IGN]