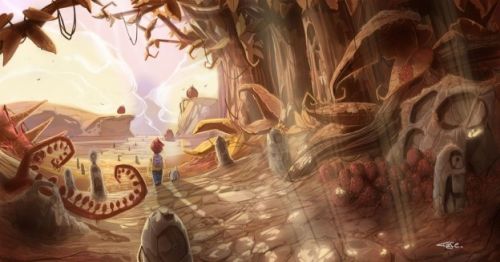 Cross platform gaming is one potential future for the games industry. Why can't I play a console version of a game at home, pick up the portable version on my journey and play the iPhone version whilst I am on the loo? With newly announced Oliver & Spike: Dimension Jumpers, this may happen. Rock Pocket Games are creating a kid friendly co-op game that will provide a unique gaming experience on different types of media.

The main game is currently announced for the PC only, but console and iVersions are on the cards. You play as Oliver and his faithful pooch Spike, in a series of platform levels. To add spice to the mix you can jump between dimensions to defy the basic laws of physics and get past puzzles that at first looked impossible.  This will lead to some Braid like levels of puzzling.

The co-op aspects of the game suggest that this may be an experience designed for children to play with their parents. Natascha Roosli, the PR rep for the game, describes the co-op as:

We know that parents like to play with their kids, IF they have time. That’s the reason we are playing with the idea to have the option to play both, Oliver and Spike, alternatively, by switching between the two yourself or to enlist the help of a friend or family member if you do not want to play alone.

Loads of additional information is available from the official Oliver & Spike website, as well as the start of a web comic that will act as a prologue to the game. Be warned, some of the translating on the site leaves the language desired a little bit to be.

As a taster for the game, I have included a concept art gallery.