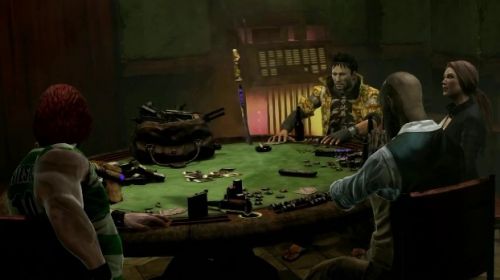 Alright! Now this is what I'm talking about!  We finally have more than one retail release coming out this week. There's even some downloadable games joining the mix!  Welcome to 2012, people.  It's time to get your game on.

Resident Evil: Revelations (3DS) This handheld horror will take players back to the roots of Resident Evil.  Tank controls and limited ammo for everyone!  You can check out the sweet demo for free via Nintendo's eShop.  2 player online co-op

Shank 2 (XBLA, PSN, PC)  Everyone's favorite prison verb is back in an all new adventure. The game features a revamped combat system and a host of swanky new outfits.  'Cause playing dress up is bad-ass. 2 player online co-op, 2 player local co-op

The Darkness II (360, PS3, PC)  Four original Darkness-powered characters form the crux of the this brutal title's new Vendetta co-op mode.  Mike Patton voices the Darkness.  Shout out to all the Mr. Bungle fans out there.  4 player online co-op

The Simpsons Arcade Game (PSN) This blast from the past appeared on the XBLA last week.  PSN gamers can get their hands on the classic tomorrow.  Don't look directly at the graphics!  4 player local co-op, 4 player online co-op

Here's the rest of the retail releases for the week.  Let us know if we missed anything.  Heck, brag about what you're picking up, if you want.