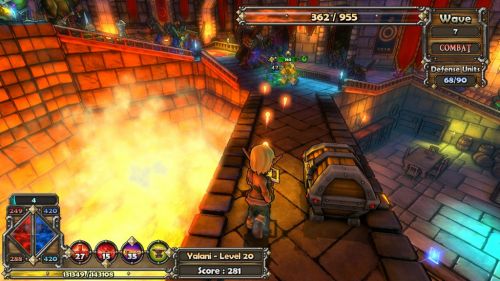 Mixing an Action RPG and Tower Defense into one game has literally paid off for Trendy Entertainment as Dungeon Defenders has reached an amazing 1 million sales across Xbox, PlayStation, and Steam.

Since its release on October 19th, Dungeon Defenders has captured the hearts of many gamers out there with its epic cartoon action and surprisingly deep customization. Its steady sales and considerable discounts over Steam has made Dungeon Defenders an unexpected hit amongst all platforms.

It is tremendously successful franchise,” stated Reverb Publishing’s CEO Doug Kennedy, “We have lots of plans to support it both with DLC and additional add-ons for the franchise.

Defending the land of Etheria, each playable character houses their own lineup of “towers” which encourages players to combine their strengths in order to survive. This along with its multiplayer capabilities, such as PvP, has made Dungeon Defenders an ideal co-op experience that many Tower Defense games have yet to achieve.

Take a glimpse at some gameplay footage to see what I’m talking about:

Three other DLC packs are still planned to release across most platforms. While Steam still has its holiday DLC (and upcoming holiday DLC’s), the New Heroes Pack, the new Barbarian playable character, the Assault Mission Pack, Nightmare Mode, and more coming up, the console versions might not be so lucky. With lots developer support and gobs of discount prices for DLC on Steam, however, this is still one game you shouldn’t pass up on any platform; the one million sales should clearly state this.

Once again: Congratulations Dungeon Defenders on your great success, and keep the content coming!