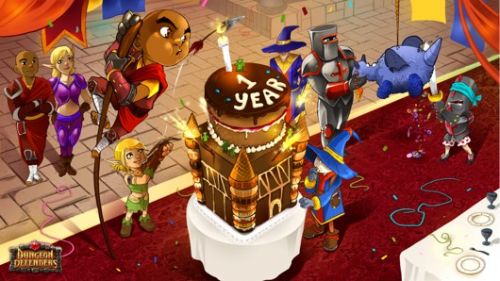 It’s somebody’s birthday! No, not just anyone’s, but a great co-op title we’ve come to love over this past year: Dungeon Defenders! Celebrating its franchise’s first year as a game, Trendy Entertainment and Reverb Publishing have released a new DLC for gamers to enjoy in the festivities. Over the next couple of weeks, gamers can purchase the “Dungeon Defenders Anniversary Pack” DLC for free online.

Being a birthday party themed, all players will see their lovable, but aggressive in-game heroes wearing party hats while defending a giant birthday cake (taking the place of the crystal core) at home base from waves of evil creatures in the all new mission, “Tavern Siege”.

This co-op tower defense game has shown a lot of heart over the past year on both PC and mobile platforms, and has proven itself as a viable gaming franchise that will most certainly grow in the future. For anyone who’s not familiar with Dungeon Defenders, now’s a great time to get into the action:

Dungeon Defenders is one of the fastest selling downloadable games of all time. Bringing together the best elements of tower defense and action-RPG progression, it allows players to team up and fight across 15 unique maps, 30 challenges and four difficulty settings in all of the game's loot-raiding, spell-casting, level-up stacking glory. Players control one of several distinct hero classes in an epic bid to fight back an ancient evil. Each character comes with special functions, and players can create and customize/upgrade an armory of weapons and equipment.

If you don’t have Dungeon Defenders to play the new DLC, don’t worry; party favors in the form of discounts have come too. Players may purchase the game (for only one quarter of the original price) at about $4 over on Steam’s Midweek Madness sales. This is also a great time to grab all the extra content that has come out over the game’s first year, also being included on sale for only $12.