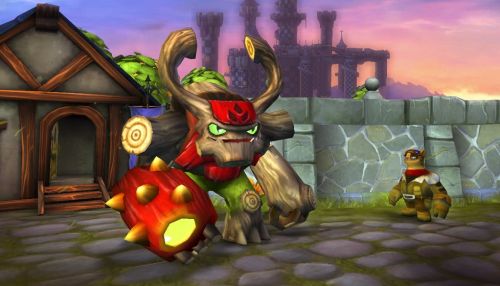 Just when I thought I was out, they pull me back in.  Surprise, surprise, Activision has just announced Skylanders Giants, the follow-up to the incredibly successful Skylanders: Spyro's Adventure.  This new game is offering bigger and better toys, as well as a whole new digital quest.  Before you freak out:  yes, all of your original Skylanders figures will work with the new game, along with all of their upgrades and XP.  No, you don't need a new Portal of Power.  Got it?  Good.

Skylanders Giants will offer 20 new characters, including eight new Giant figures as well as eight new regular-sized characters featuring all new lighting effects (no batteries required!).  Both of these new types of Skylanders will have additional in-game benefits.  A whole new adventure will be available, including new Hero Challenges as well as "enhanced" Elemental Zones.  There will also be more options for the PvP Battle Arena, as well as increased integration with the Skylanders Spyro's Universe website.  Check out the following announcement trailer to see a Skylanders Giant in action.

As I perused the press release I couldn't help but notice that "head to head" play was mentioned, but there was no information on co-op.  So naturally I started freaking out and fired up ye olde email machine.  Activision PR put my fears to rest and confirmed that "yes, it does have co-op play," and then they punctuated it with a smiley face!  This is the internet equivalent to being written in stone, people!  Co-op confirmed. (You can't be too careful, these days.) I'm gonna pre-order this so hard.

Skylanders Giants is set for a fall 2012 release, and it will be coming to almost every conceivable platform, including Nintendo Wii, Xbox 360, PlayStation 3, PC, handhelds, and unspecified mobile devices.  We are assuming that the co-op will still consist of two player local co-op, especially since the Portal of Power remains unchanged.   Ready your wallets.