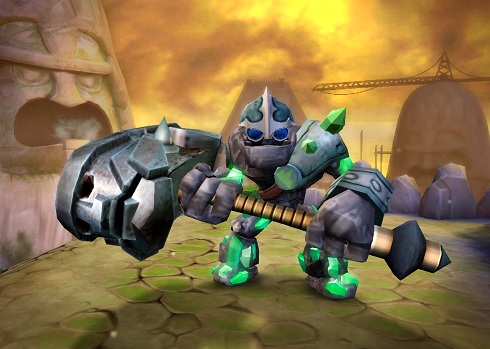 In the list of bestselling games of 2011 you would find near the top the family friendly Skylanders.  Activision not only made money from the game itself, but the countless character models they sold to use with the game.  This is one developer that knows a good thing and the latest trailer for Skylanders Giants shows that the sequel will be more of the same, but bigger and brasher.

The latest trailer is a pre-launch video, with the game planned for 21st October.  Giants will be a 2 player local co-op experience like the first game, but with the added input of new and powerful characters that can lift, smash and hurl things that the likes of Spyro could only dream of.

One such giant is the recently revealed Crusher, seen in the gallery below.  His mighty hammer suggests that he has a touch of the Thor complex about him.

Check out the new trailer to get a glimpse into the different ranges of Skylanders heroes that will accompany the game, from the giants themselves, to glowy guys.