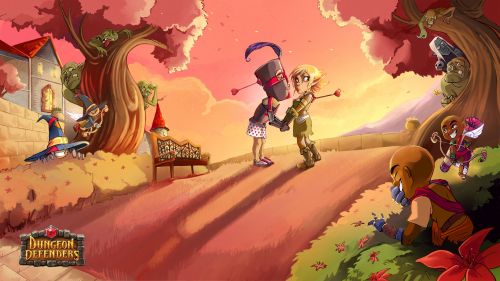 The folks at Trendy Entertainment are out to celebrate the heart shaped holiday with special content for Dungeon Defenders.  A brand new challenge map called "Sky o Love" is now available as well as bonuses for pairing up boy and girl characters from the game.  In addition the tavern now has a love is in the air theme and there's four new outfits for your characters - including pants for the Squire.  For shame, I was told pants were optional.

Apparently there's a new mob too, a sort of grotesque looking cupid thing.  I wouldn't trust him to do any match making though.

After all of that you can also find the iPad/iPod version of the game on sale for just $0.99 right now.  Swell.  You'll never be more sick of rainbows, hearts and flowers than you are after playing Dungeon Defenders this week.  Just watch the video for proof.

All of this lovely content is, of course, only available on the PC.