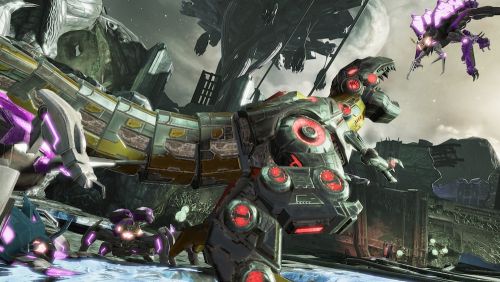 Things have not been going well for Transfomers: Fall of Cybertron.  Sure, it's the sequel to what many believe is one of the greatest Transfomers games ever made.  It had a fantastic debut trialer at last year's VGAs, and it features everyone's favorite Dinobot, Grimlock.  What could go wrong?

If you're into solo campaigns and console gaming, not much.  If you enjoy co-op story modes and like to play games on your PC, you're screwed.  First, Half Moon Studios killed campaign co-op, and then they recently announced that the game would not be appearing on the PC.  The previous game, Transformers: War for Cyberton, featured both of these options.

We're not certain that a co-op mode even exists.  There have been hints at a re-vamped Escalation mode, but little to no concrete information.  (If you know any details hit us up in the comments section or at tips@co-optimus.com)  Right now our fingers are crossed while we wait patiently for any co-op news.  To help pass the time we're going to keep watch that rad VGA debut trailer.  Grimlock's such a badass.

Transformers: Fall of Cybertron is scheduled for a fall release.  It will be available on the Xbox 360 and PlayStation 3.  We don't have any co-op details, yet.