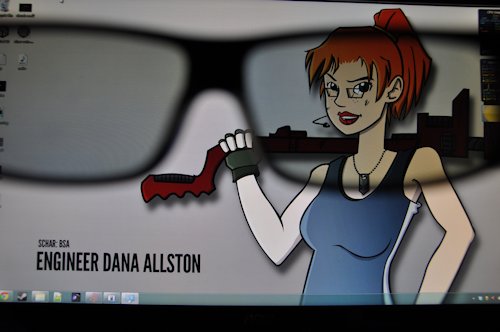 3D gaming and movies seem to be all the rage these days.  Every big theatrical release touts it's 3D viewing and several big games tout their compatibility with 3D on the PlayStation 3 and PC.  Most home 3D viewing is done using a system that requires a set of big glasses that use alternating eyes to give the impression of 3D.  But there's another method that's a lot less expensive and a lot closer to the experience you'd find in a movie theater - and that's polarized.  Over the past few weeks I've been using a new monitor from AOC that uses this method to display 3D images.

Called the AOC E2352PHZ 23" 3D Display, I wanted to see just how well this technology worked, just how well the games could look, and if the 3D actually ADDED anything to the gameplay experience. This is a 1:1 crop of the monitor with the glasses shown at the bottom half and the bare eye at the top.  What you can see in the bottom half is the polarized lens, basically every other line is displayed on one lens of the glasses.  Combine the other lens which sees the opposite lines and you get a 3D effect.  It's really quite a simple solution and it works on a principle similar to lenticular cards you'd find in vending machines.  If there's a downside to this method it's that the glasses do darken the image a bit.  Still - the huge advantage is just how light these are, there's virtually no fatigue from wearing them.  AOC includes two pairs in the box too, could some shared screen 3D co-op gaming be in our future? As a PC monitor you have a few input options including D-SUB, DVI and HDMI.    If you want 3D you'll need to use the HDMI 1.4a input.  The monitor also has built in speakers which do a somewhat decent job, though you won't find any lows coming through them.

The PC standard for 3D on the NVidia side is something called 3D Vision, sadly that's not supported here, because that technology relies on dual image glasses.  This means at the driver level, 3D isn't supported - instead you're going to need to use AOC's custom software for this.  Honestly, it leaves quite a bit to be desired in terms of functionality - but it will find compatible games with relative ease and it's capable of launching them in 3D no problem. Co-Op games I have that are supported.


Once you launch the game you'll immediately notice something is different and it's time to put on the 3D glasses.  You are also greeted with an OSD which will give you some options for adjusting and tweaking the 3D.  If you want a more pronounced effect or a less pronounced effect, this is where you can do it.  It's all bound to keyboard mappings.  You can even disable the 3D on the fly if you want. One problem I found in general with the polarized 3D is you almost need to sit in a sweet spot.  Sit back too far and the image becomes blurry.  Of course this is why there's the OSD options to adjust.  Luckily with a monitor you pretty much know where you'll be sitting and your distance the entire time so once you set it up you're done.