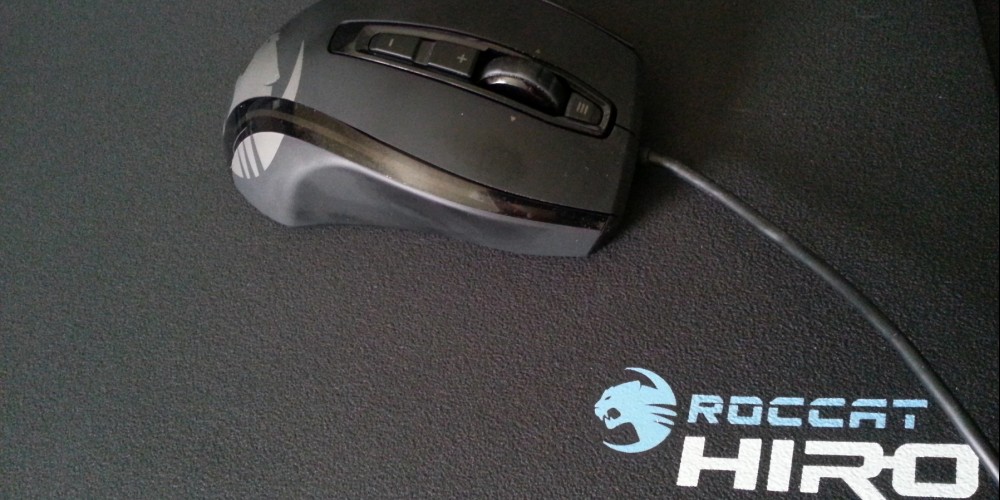 It took me around 17 years of PC gaming before I finally got an actual “gaming keyboard” and “gaming mouse” (the Roccat Isku and Kone[plus], respectively). My world wasn’t shattered with the introduction of these devices to my gaming habits, but it was made easier and a little better. The only gaming accessory I hadn’t upgraded was the mousepad itself.

Up until this point I’d been using an ergonomic mousepad, which sufficiently did its job as a surface upon which the mouse’s laser can detect and track motion. When Roccat offered up one of its Hiro gaming pads for review, I figured, why not. It couldn’t make that much of a difference, right?

I was actually surprised by my experience with the Hiro. I went into the whole thing thinking “a mousepad is a mousepad” for the type of gaming - RTS, some FPS, action RPGs - that I mainly find myself doing on my PC these days. For the most part, that’s true. The greater accuracy in controlling where your mouse cursor ends up and being able to get it there faster by using a mouse with a high dots per inch (DPI) count isn’t really a factor for me. However, the ease with which it gets there is a welcome improvement over your typical mousepad you get from work or Best Buy for $10.

Before diving too much further into all that, though, here’s a quick rundown of everything ROCCAT touts about the Hiro:

- Vulcanized silicone surface, with a complex 3D structure, that delivers maximum gliding speed and control on both the x and y axis

- Hiro’s edges are smooth and rounded... and thanks to a power-bonded construction between upper and lower surfaces, the Hiro’s edges won’t fray

I’ll be honest, I’m not up to date with all my science so I can’t tell you what a “vulcanized silicone surface” actually is. What I can tell you is that the mouse does glide/slide/move more smoothly over the surface than your standard plastic mousepad. I tested the Hiro with my Roccat Kone[plus], a Razer Lachesis, and a standard USB mouse. That “ease of movement” I was talking about earlier was readily apparent for all of them as I could move them across the whole width of the Hiro with, what felt like, the barest of effort from my arm. This wasn’t something I noticed that much at first, but after going back and forth between the Hiro and my old mousepad, it’s a difference you do start to notice more and more. For the Kone[plus] and Lachesis, which have adjustable DPI settings, I noticed better response and control from the higher DPI rates using the Hiro over a regular mousepad. This was a nice change, as I usually turned them down to around 1500 on my previous pad, but it’s also one that, for me, didn’t really impact my gaming over all. As I mentioned before, most of my gaming doesn’t require that much precision in my clicking (you just have to get in the general area of Diablo before “clickclickclickclick”). So the change here wasn’t quite as appreciable as the smooth movement. It’s the type of change, though, I suspect gamers into really quick reaction games, like DOTA 2 or Starcraft 2, would notice and appreciate more.

As for the rest of the features of the mousepad (i.e., it’s construction and “force field”), not too much to say other than they do as advertised. My mousepad rests in a keyboard drawer in the desk, so it doesn’t often see too many risks of getting liquid spills on it. However, this is a product review, so I took it upon myself to sit the pad on a kitchen counter and spill a whole glass of water on it. Once I cleaned the mess up off the floor, I saw that all the water on the mousepad itself had beaded up and could easily be wiped away with a paper towel. Additionally, the silicone top and rubber base are nicely fused together and didn’t peel away easily when I tried to pull them apart. Speaking of that "non-slip" rubber base, it definitely stays put. Like sweaty flesh on a leather chair, once that thing sets in, it won’t shift without some effort. A top/bottom view of the Hiro

The two negative things I have to say about the Hiro are on the price and the size, the latter of which isn’t exactly something I’d call a drawback. The pad retails for $49.99, which is a little higher compared to other gaming mousepads (e.g., the Razer Megasoma 2) of equivalent construction and claims. This may be due to the fact that Roccat’s based out of Germany and there’s international shipping/pricing, but if pricing is a factor, there is that aspect to consider. The second consideration, the Hiro’s size, really depends on your setup. Measuring in at roughly 14” by 10” (350mm x 250mm, to be precise) there’s plenty of surface for your mouse to move across, but if you’ve got limited space on your desk or in your keyboard drawer, you’ll be stacking other things on top of it and putting much of that space to waste.

By the numbers, the Hiro is a quality mousepad that delivers upon the features discussed in its promo materials. Going by personal experience, I can’t tell you how it compares to other gaming mousepads, how it improved my win-loss ratio in a League of Legends game, or the advantages/disadvantages of a soft pad versus a hard pad. I can tell you that, as an average gamer, the Hiro is a better mousepad than any I’ve used before and I’m afraid that I’ll never be able to go back to the $5 bargain bin pads again.

The Roccat Hiro was tested using a Roccat Kone[plus], Razer Lachesis, and standard USB mice in a Windows 7 64-bit environment. The manufacturer provided the Hiro to Co-Optimus for review purposes.