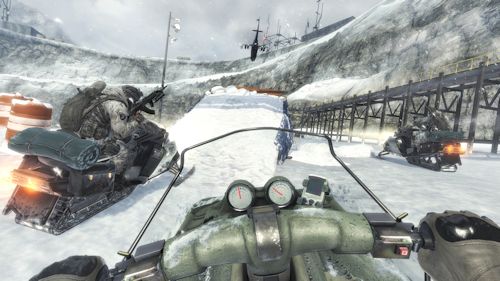 Call of Duty: Modern Warfare 3's first major content pack is upon us and with it comes two brand new cooperative missions.  We went through the original Spec-Ops missions extensively and for the most part, these are some of the best Call of Duty set pieces to date, especially since they are meant to be experienced with a buddy.  On top of these there's a handful of new maps for Modern Warfare 3's survival mode.

Here are some impressions of the two new missions, the additional maps, and what they have to offer.

Honestly this probably isn't the best mission to jump into if you haven't played Modern Warfare 3 in 3 months.  You start off by choosing who drives the snow mobile and then it's off to the races.  If you're the driver you need to steer a bit, avoid gunfire and HIT THAT RAMP FITTY...oh sorry, wrong game.  Anyway, you can also pull out your gun and bust some fools on other mobiles while your partner uses dual uzis to dispatch the trailing enemies.

Once you make it to the mines you and your buddy need to work your way through a few dozen enemies.  It's mostly a chaotic darkened room filled with army trucks, snow mobiles and bodies of enemy soldiers, but you'll need to find your way through to a control room and set the place to destruct.  Why is it every enemy compound always has a self destruct sequence?  It's like an exhaust port on a space station.

From there it's a countdown as the whole place goes up and you need to make it out to a helicopter and cover your escape. I thought Black Ice was intense, but Negotiator kicked things up.  First, one player is actually a hostage at the start, looking down at a line of hostages being executed.  Your buddy my quickly comes to your rescue, blowing open the door, and knocking a gun in the air towards you all John Woo style.  You catch it, cap some fools, and off you go.

Then you both need to take to the streets and rescue as many of the 35 hostages as you can.  You are pounded with wave after wave of brutal enemies, but to make matters more difficult, you need to be quick on the aim to rescue any hostages about to be executed.

The action is broken up by several breach sequences where you'll quickly have to take out soldiers in rooms filled with hostages in slow motion.

There's a few key moments where things get really tough - one a helicopter drops a butt ton of enemies on you.  My advice?  Grab the mini gun.  The second is a courtyard area where there's very little cover and a bomb in the middle.  My advice?  Disarm the bomb and hide in the corner and pick off the enemies as they funnel in.

At the end you're rated by how many hostages you managed to save, my best was 28 out of 35.

You can watch our original series on the Spec-Ops missions with video playthroughs here: Black Box takes place outside a crashed jet in a suburban neighborhood.  Most of the combat takes place in the fuselage, but there's some higher ground in the surrounding houses that are really worthwhile.

Overwatch might be the toughest map for survival because of the lack of any real strategic spot, or at least, any obvious one.  Plus, the edges of the map are deadly - because you plummet 50 stories to your death.

Liberation and Piazza are somewhat similar, they are street fighting maps with some choke point areas well as areas you can get easily over run in.  These might be the most fun for survival, but also the most uninspired.

Content Drop #1 is out now for Call of Duty Elite members on Xbox 360.  To download the map pack you'll need to fire up CoD and go into the multiplayer section, then select "Store."